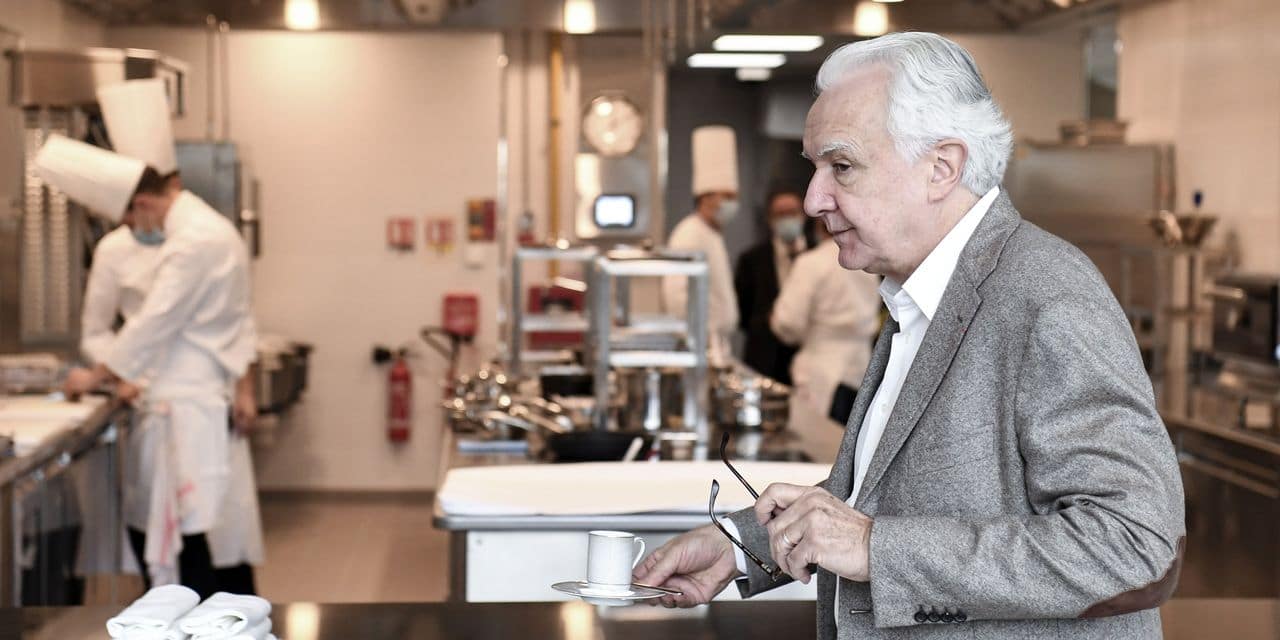 “It’s cold, we have to turn up the heating!”, Launches the native Landais chef, crossing one of the two brand new restaurants – closed to the public due to Covid-19 – at the Ducasse School, “a” aesthetic, resolutely contemporary place, the culmination of a 20-year dream “, which opened on November 9 in Meudon (Hauts-de-Seine).

“If I hadn’t been a cook, I would have been an architect: you can’t teach beautiful cooking if the place isn’t as beautiful as what you teach,” he told AFP .

On the wall of this “high-tech” kitchen, a testimony to the past: heavy tinned copper pots, centuries old, found by the chef, at the head of 34 restaurants.

This building with a sleek design of 5,000 m2 in Meudon (Hauts-de-Seine), which has 9 workshops, welcomes students in initial training preparing two “bachelors” in 3 years, which combine management and culinary arts or pastry (cost: 37,000 euros), but also professionals in continuing education or retraining.

Among them, a young Lebanese 28 years old, graduate architect, Tara Habis: “after losing my dad in a motorcycle accident, I decided to do what really makes me happy: baking”, she says. to AFP.

His project ? one day mix her two formations to create “experimental dinners”, she explains, her eyes shining.

The practical teaching of the Ducasse School, in small groups of 14 students, translates “the avant-garde vision of the chef, very focused on eco-responsibility, short circuits, seasonality of products, respect for producers, which the students visit on their farms, ”says General Manager Elise Masurel.

The professionals trained here will be “the messengers of what they learned there: to nourish your contemporaries with a lot of humanism, it is an act of generosity and of sharing, in this difficult world”, assures M Ducasse.

Due to the health crisis which forces them to keep the borders closed, the campus welcomes only 30% of foreigners among its 220 students – against 300 expected – and 40% of teaching is done at a distance, with an emphasis on ” the ability to bounce back in a context of crisis “, specifies Ms. Masurel.

Violence in the kitchen must be “judged”

Among the ten or so teachers, the chef in residence Jacques Maximin, said to himself, behind his mask, happy to pass on “58 years of experience” behind the stove, with “always as much pleasure”.

The crisis has been “a tremendous accelerator of digitization”, according to Benoit-Etienne Domenget, CEO of the Sommet Education group, which in 2019 took 51% of the capital of “Ducasse Education”, renamed Ecole Ducasse and co-owned with the company Ducasse Développement, chaired by the chef.

Having “access to all academic content whenever they want,” such as video lessons, “improves students’ ability to learn,” says Domenget.

Beyond the Covid-19, this return to school is clouded by an accumulation, on social networks and in the press, of testimonies from young female chefs who denounce sexual violence suffered behind closed doors in the kitchens in recent years, without however identifying their attackers or institutions.

At the end of September, the Franco-Japanese chef Taku Sekine, trained by Alain Ducasse, ended his life at 39, after accusations of sexual assault that had not been the subject of complaints, published by a specialized site .

Asked about the need to promote a climate of respect in the sector, Alain Ducasse considers “ill-treatment and discrimination, racial, physical or sexual, completely unacceptable, towards men or women”.

“There has been violence in the kitchen in the past, yes, but it must stop, all of this is reprehensible,” he continues. “It must come to light, that those responsible, the accused be tried.”

The chef says he is concerned about having women at the head of his establishments, such as Fabienne Eymard at the Benoît bistro or Jessica Préalpato, pastry chef at the Alain Ducasse restaurant at the Plaza Athénée. “Often,” he notes, “they surround themselves with women …”

Previous Post
Belgian winemakers are popular: six sparkling wines awarded at the Brussels World Cup!
Next Post
Calling on your memory, playing on textures … Chef’s tips for cooking without having lost your taste