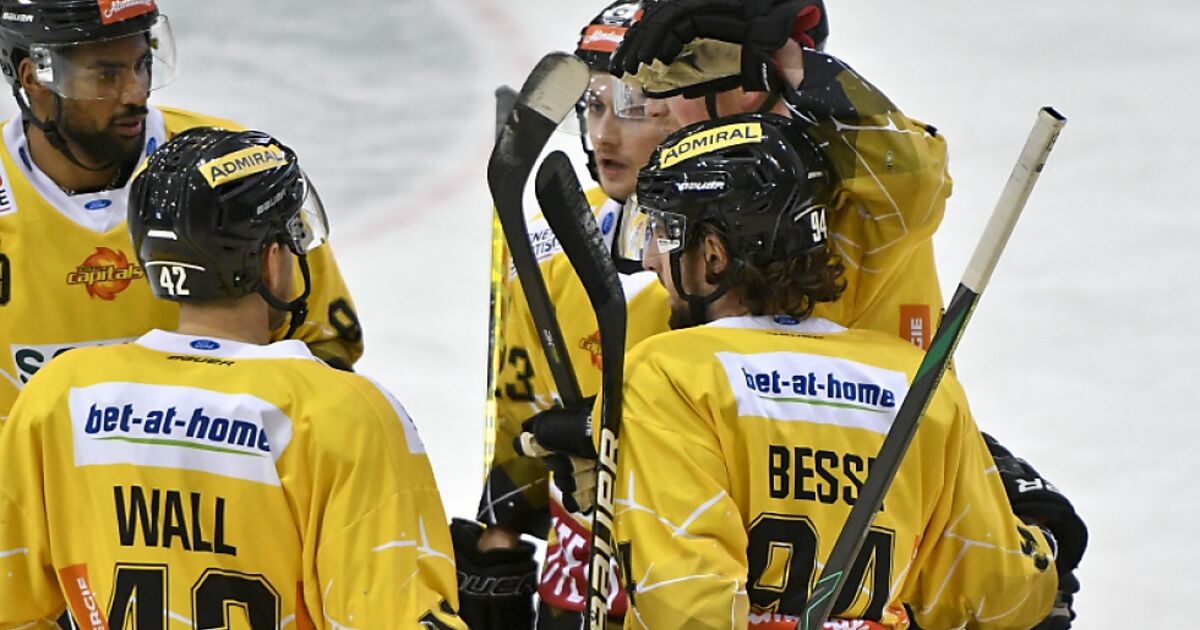 Capitals before the semi-finals – Salzburg shortened, KAC in front

The Vienna Capitals are about to move into the semi-finals of the ICE Hockey League. The Viennese also won the third match of the first play-off round against Fehervar on Tuesday. After the 1-0 win, they only need one win to get promoted, and they have their first chance on Friday in Hungary. Salzburg, meanwhile, shortened against Dornbirn by a 4: 1 to 1: 2. The KAC took the lead again with a 3-2 win against the VSV.

The Capitals came after the 3-2 in Fehervar again to a narrow success. At home they had to wait until the 24th minute before Benjamin Nissner wrote to a successfully played counterattack. After that, there were advantages for the Viennese until the end. “We knew that every game in this series would be hotly contested. In the play-offs, it is even more important to win the games in which a goal decides,” said Capitals coach Dave Cameron. Fehervar needs a miracle now. Because a 0: 3 catch up, that was only one team in Austria with Linz in the 2010 semi-finals against the Capitals.

Salzburg gave an impressive answer to the disappointing appearances against Dornbirn so far. The Bulls, who are much more aggressive this time, took the lead in the first power play by Stefan Espeland (9th), after having survived four minutes of being shorthanded at the beginning. Filip Varejcka (25th) and captain Thomas Raffl (28th) took care of the next two goals of the game-defining hosts.

Five minutes later, Vitalijs Pavlovs (33rd) wrote to Vorarlberg for the first time. However, the Salzburg team was no longer wavering, but increased to 4: 1 in the final section through Alexander Rauchwald (48th). “We took a load off our hearts today, the first two games didn’t go as we wanted. We haven’t played our best game today, but it was finally play-off ice hockey that we wanted to play and that we took we will also go to Dornbirn, “said Rauchwald.

The VSV had a lightning start in Klagenfurt, Jerry Pollastrone scored for the outsider after just 27 seconds. In the ten minutes that followed, the Villachers were more dangerous and were unlucky with a Collins shot at the pole. The second goal came from Matt Fraser (13th), who used a Haudum pass with a full shot into the Kreuzeck perfectly to equalize. In the middle third, the VSV again advanced through Sahir Gill (23rd), Rok Ticar (25th) equalized a little later. With 2: 2 it went into the last break.

In the final section it was again Fraser (54th) who took the lead for the first time. They did not give the red jackets out of their hands, although it almost went into overtime. The supposed compensation in the last second was not given after the video study because the puck only slid over the line after the siren. The Klagenfurters also won their twelfth home game against their arch rivals in a row. The fourth match takes place in Villach.

Like the KAC and Dornbirn, top favorites Bolzano also lead 2: 1. The South Tyroleans fought against Bratislava with a 2-1 after extra time, their fourth home win of the evening.

Previous Post
Van Aert already in Olympic form: “Wout really impressed me”
Next Post
Brazil: Even more rainforest has been destroyed since the pandemic