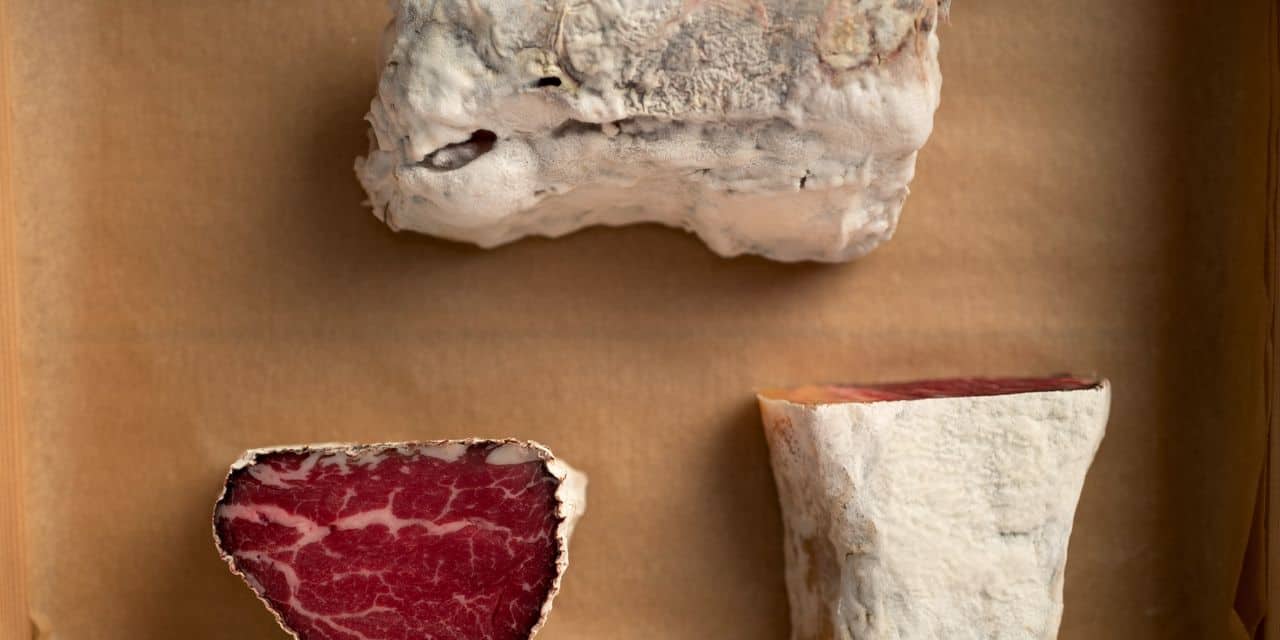 Koji, magic mold soon to be an essential ingredient for great chefs?

It arrived in mid-December, this funny refrigerated package containing two magnificent pieces of marbled meat (cut in the rib steak and the paleron) from Txogitxu from Galicia from Carnivale, a specialist distributor in the Antwerp region. But the package mainly contained funny ingredients, the usefulness of which we will discover later: sheets of food paper made from potato starch, which look like these candy wrappers that we ate as a child, a liquid called shio koji, made from barley and parsnip, and finally a sachet containing a powder of koji or Aspergillus oryzae.

It all seems a bit mysterious, but Dennis Ekisola will soon have shed some light on our light. This Nigerian-born chef has just launched Kojinomics, a site offering online master classes and professional equipment to private individuals and chefs who wish to embark on the “kojification” of meat.

What is the koji?

But before we get to the labs, let’s take a closer look at what the koji is. Aspergillus oryzae is a domesticated and harmless microbe, fungus, mold. Cultivated in Japan since the 8th century and even before that in China, the koji grows rapidly on cooked cereals (rice, barley, etc.) in a hot – even if it does not survive above 39 ° C – and humid environment. . Under these favorable conditions, the mycelium will settle on the cereals and wrap them in a nice white down.

Koji produces enzymes that break down proteins (proteases), starches (amylases) and fats (lipases) contained in cereals into amino acids, simple sugars and fatty acids, respectively. In fact, the koji speeds up fermentation by making the breakdown of proteins and starches more efficient. It especially confers, by breaking down these proteins made up of chains of amino acids, flavors rich in umami. In Japan, koji is used to make sake, soy sauce, miso, amazake (sweet drink made from rice koji, rice and water) …

Fascinated by koji, Dennis Ekisola immediately saw the many possibilities that it offered, in particular to speed up the maturation process of meats. “Koji is perfect on meats rich in fat such as pork or beef. By inoculating them with koji, we obtain a dry-aged meat that has not lost its initial weight, we increase its flavor and even its digestibility. “, enthuses the chef.

In the book Koji Alchemy, Anglo-Saxon bible on the subject (see below), it is specified that by using the koji, we can avoid a loss of raw material which can reach up to 50% – loss of water contained in the meat, but also the dried edges – and that the meat matures in just a few days, instead of a month with traditional maturation by drying.

Curious to know how to “kojify” meat and to understand the impact this famous koji has on it, we had to embark on the adventure! This goes without saying without professional equipment, but always ensuring hygiene and maintaining two essential parameters: heat and humidity, essential for the proper development of the koji.

After marinating the meat for 12 hours in the shio koji, it was wrapped in a paper made of potato starch. A unique process developed by Dennis Ekisola to feed the koji and so that it can grow evenly on the meat.

Packaged in this way, the meat is then sprayed with koji spores (developed in a laboratory in Japan) on all sides. In a wooden box, we have installed bowls of hot water and a makeshift stainless steel grid to deposit the meat, we will also have dug two side holes. One to pass the thermometer probe – and ensure a constant temperature of around 30 ° C – the other to slide the weather station probe to control the humidity, which should be around 80 -90%. For the detail, the box was placed on a dehydrator to benefit from a regular heat …

Very anxiety-provoking – you really wonder what’s going on in the box! -, this first test will have lasted 24 hours, and ended… with a success. Not necessarily easy to tell yourself that, under this layer of white mold, there is … edible meat. And yet… The smells of white truffle and toast are reassuring. While after frying, this noble rot made the meat firmer and created a superb golden crust. The taste is rich and intense.

Soon on all the tables?

Kept a secret for centuries, the koji has entered Western kitchens for ten years. And our chefs are beginning to see its versatility.

It has already become one of the essential ingredients in the kitchens of the famous Noma in Copenhagen. In his book signed with David Zilber, The Noma Fermentation Guide, chef René Redzepi explains for example how to make a pearl barley koji or how he uses it to prepare a light vegetable broth, with the same taste richness as that provided by meat bones and butter, an oil to prepare a tasty mayonnaise, or the most varied miso, like that of hazelnuts.

If Dennis Ekisola, concentrates for the moment on meat, he also tries experiments. “The koji makes the cod or turbot more firm and reinforces the flavors. It is also perfect, in the form of a shio koji for making tempura without yeast. It makes the beeswax edible, which then melts in the mouth. . At the moment, I’m even working on the coffee with Way, a roaster from Ghent. We fermented Brazilian green coffee beans with koji… The coffee is very smooth, without bitterness, with a great length in the mouth… “, says the chef.

Dennis Ekisola is already working with a few Belgian chefs to provide them with original ingredients, such as this coconut amazake that chef Thierry Theys, of the restaurant Nuance in Duffel, serves in a cocktail with sherry oloroso, accompanied by a bite to eat. caviar and heart of palm.

In the book Koji Alchemy, we also learn that certain vegetables (carrots, squash, maitake mushroom…) can, thanks to the koji, be transformed into vegetable deli meats.

Nicolas Decloedt, from Humus x Hortense in Brussels, demonstrated this last November during the event Eating the Gap, which virtually brought together chefs from all over the world. A boiled, smoked, salted beet, inoculated with mold and then dried was a marvelous imitation of bresaola …

Of Nigerian descent, Dennis Ekisola was born and raised in Germany. A graduate of the hotel management school, he was voted best young chef of the year at a competition in Munich. Very quickly, he landed his first jobs in German starred restaurants, before becoming a private chef on yachts. For nine years, he traveled the planet and realized that it was not always easy to find the best products… In 2013, he launched his first box: he supplied the boats with top-of-the-range ingredients. will find itself in the four corners of the world!

Five years ago, he settled in Antwerp and this time began to import exceptional Japanese products (www.elicious.shop) intended for great chefs (Nick Bril, Roger Van Damme, Jan Tournier…). A project materialized in 2018 by the opening of a grocery store in Antwerp, at the Felix Pakhuis. At Inua, he offers his discoveries to chefs and individuals alike. The koji adventure started two years ago. During confinement, Dennis Ekisola studied the process from every angle, before launching his new online site on February 1. On Kojinomics.com, he sells cedar boxes (wood with antimicrobial properties traditionally used in Japan), kits and master classes for private individuals and professionals who wish to learn more about the koji and to get started in particular in the “kojification” of meat. L

To learn more about the koji: www.kojinomics.com.