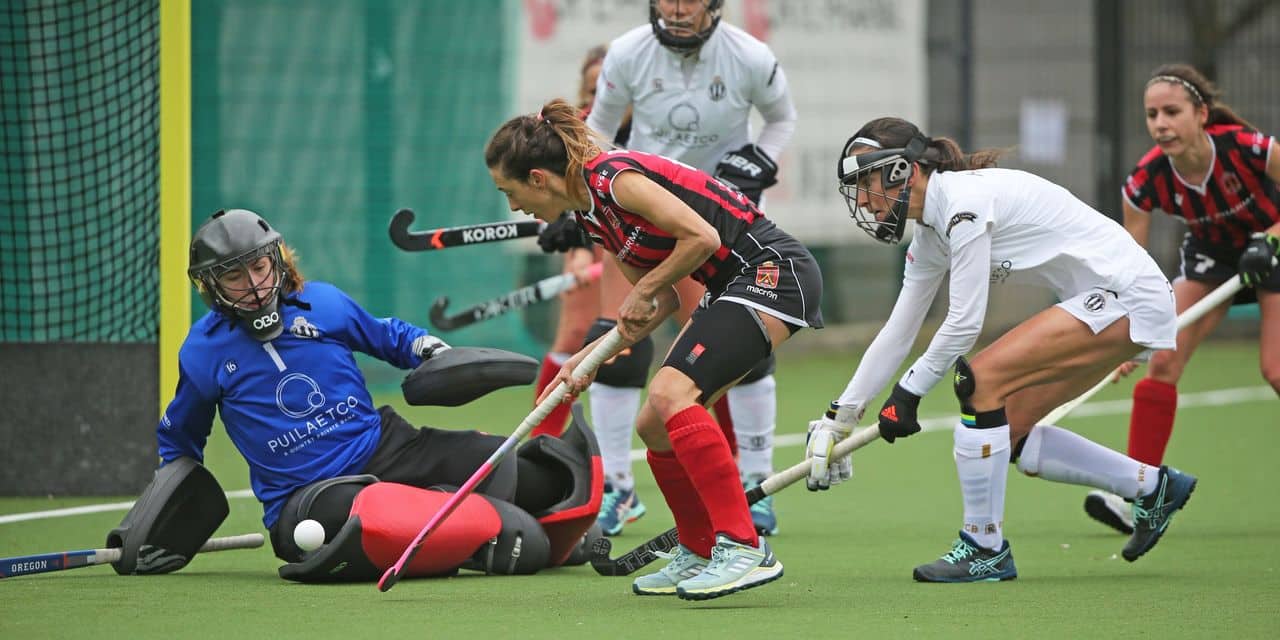 Ladies Hockey: In two minutes, the Daring loses everything and gives way to Racing

With 3 points behind their opponent of the day, Racing had to reproduce their victory in the first leg over Daring. Thibaut Cornillie was confident: “We are going to block their best players and continue our momentum from the Herakles. “Immediately said, not necessarily done because from the start of the meeting, it was the Daring who was the most enterprising. Grimard had to intervene from the second minute of the glove on a backhand from Jardel. During the phase, she obtained the first pc of the match: a big mess took place in the defense of Racing cleared the ball directly on the line. In the 4th, another setback from Jardel towards the goal. The Daring monopolized the ball by being very present in the middle of the game, with an omnipresent Bertarini. In the 7th minute, Racing obtained their first pc which was deviated lengthwise. The meeting became nervous, with refereeing decisions that did not satisfy the players: first green card in the 10th minute. The Uccloises restored a certain balance with a shot from Sanguinetti next door (12th) and a more sustained press. In the 15th, Aleman deflected a long shot near the goal. The first quarter ended with a technical solo from Bertarini who played against 6 opposing players, relying on Borgia twice: very high art.

The second quarter started with a pc for Racing following a bouncing ball from Meulemans: Montserrat stopped with a glove. In the 27th, the Daring obtained their 2nd pc, blocked by Haussener as first out. 28th minute, 3rd pc for the Daring and another stop for the first outgoing, here Englebert. 30th minute, 4th pc forced by Bertarini, badly blocked. In the 31st minute was the incident of the match: a long backhand from Englebert came into the circle and was lightly hit by a stick, Montserrat let the ball pass into the goal. The referee Mlle Mahieu whistled clearance. But on intervention of his colleague Mr Jooris, indicated that the ball had been touched by an ucclois stick, in this case by Letor. And so, it was the opening of the scoring (0-1). Big claim of Daring who maintained that it was indeed a red stick that had hit the ball. On the relaunch, the ball arrived in the circle of Racing and the ball went up in a bell: Pyck knocked it down in the goal. But Mr Jooris canceled the goal for a dangerous play beforehand. In two minutes, a score that could have been 1-0, was reversed to 0-1. There is no doubt that the images of BX1 will be watched with attention by both camps. The quarter ended with a deceptive shot from J. Willems which Montserrat deflected.

The second half started with a more applied Racing and a big intervention of the local goalkeeper on Boon. This did not prevent the Molenbeekoises from worrying Grimard on several occasions. In particular on their 5th pc that Jardel sent on his glove, with a longitudinal deviation. In the 42nd, the defense emerges in front of a big attack from Boon, J. Willems and Englebert. In the 49th minute, Sanguinetti returned to the left and fired a strong shot on Montserrat: she pushed back into Letor’s stick who took back in the goal (0-2).

The last quarter was going to be again to the advantage of the locals. In the 54th minute, Aleman narrowly missed two balls that she tried to deflect in a dive. In the 56th, De Mot alone at the head of the circle could not cock her shot in front of the goalkeeper. In the 60th minute and in the following, the Daring obtained 4 new pc but Grimard and his sorters annihilated the attempts of the Molenbeek players; we will retain among other things a nice stop of the Grimard stick at the 66th. This defeat of Daring places him in 3rd place in the pool, Racing jumped him to 2nd thanks to a better goal average.

The Dragons had to wait for the 40th minute and the power of Magis on pc to open the scoring. Simons overtook the pisa in the 48th. Thanks to this victory, the Dragons took the lead in the pool ahead of Racing. The Herakles are mathematically eliminated from the semi-finals.

The Gantoise was quick to take the lead: from the third minute, Oviedo deflowered the mark. The match was very physical. Ballenghien doubled the score in the 40th and Oviedo set the numbers in the 58th minute. La Gantoise is 14 points ahead of its pursuer.

It was an opportunity for both teams to stand out. They couldn’t do it, Wisiniewska responding on pc to Albertyn’s initial goal. The Victory made a less bad deal thanks to this draw and the three teams follow each other as follows Antwerp 16 pts, Braxgata 14 pts and Victory 13.5 pts.

The Leopold recovered after 3 defeats in a row: he beat the White Star with a small goal, an achievement by Jasbeer Singh in the 59th minute. The Mechelse was also beaten by a goal at the Waterloo Ducks: it was Peeters who signed the winning goal two minutes from time. Finally, Louvain continues to succeed in its recovery operation after its 2-3 victory at Wellington. Dujardin (2) and Van Lindt on stroke, brought the Louvanistes to the velvet before Lecas returned to 2-3; Well’s first goal was scored by Roque. The ranking narrows between the White (11 pts), the Léo (10.5 pts), the Mechelse (9 pts) and Louvain (8 pts).