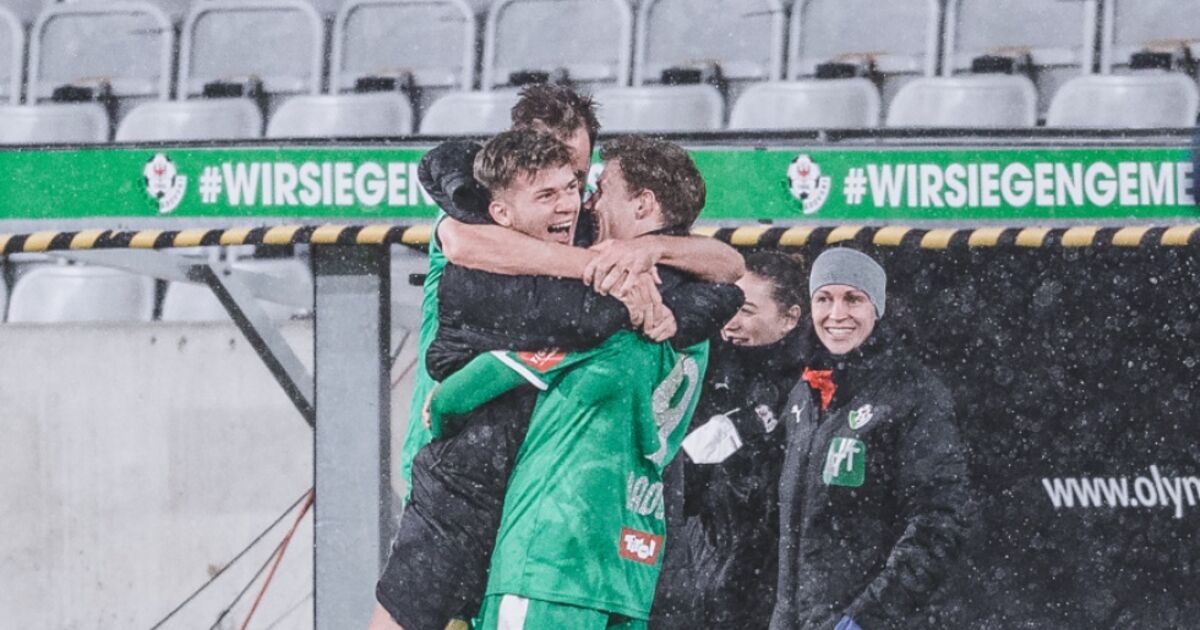 Thanks to the support of the SKN St. Pölten, the WSG Tirol is represented for the first time in the master group of the best six teams in the Bundesliga. Since the Lower Austrians made 3: 3 at TSV Hartberg in the 94th minute, the Tyroleans finished sixth after a flattering 1: 1 against Rapid. “Hitchcock couldn’t have written the thriller better. It was a real rollercoaster ride,” said sports director Stefan Köck.

When Sascha Horvath put Hartberg to 3-2 in the 76th minute in the parallel game, the dream of the “top play-off” seemed over for the Tyroleans. Tobias Anselm (84th) managed to equalize himself, a winning goal that would have been necessary to fix the matter on his own, but was by no means in the air. Therefore, in the finish, the focus was more on Styria. And it was only a few minutes after their own final whistle that coach Thomas Silberberger’s squad were certain of being able to cheer extensively due to a goal from St. Pölten’s Kofi Schulz (94th).

“You have to be lucky once in a while. The fact that it turns out this way is amazing. Kofi Schulz is my all-time hero, I absolutely need him on my side in the summer,” joked Silberberger. A “huge stone” fell from his heart. The season goal of relegation is already fixed after the end of the regular season and before the division of the league. And that after that season in which you would have been relegated and only allowed to continue playing in the upper house due to the financial collapse of SV Mattersburg.

“Somewhere we come full circle. Last year we had the chance to stay inside until the last second and today we fought until the last second to make it into the championship group. That is simply a huge milestone for the club,” said Silberberger . Of course also for him, who has been the coach of the former WSG Wattens since July 1, 2013. “We started in 2013 with fourth place in the regional league, now we’re in the champions group, that’s just plain cool.” That was celebrated on the pitch like a championship title, beer showers were a must. Then it went on with a “Corona celebration” (Köck). “We will definitely have a beer or two,” announced Silberberger.

The participation of the Tyroleans in the elite circle had already been indicated in autumn, but after only one victory – most recently the 5: 3 at WAC – in the last eight rounds it was still really tight. “Even if we didn’t score the points recently, we didn’t go off our path,” said Köck. As a reward, the lack of luck in the past few weeks came back at the right time. “In the end it was just more brutal. I’ve aged a few years. But if it turns out like this in the end, you’ll gladly accept it,” emphasized the 45-year-old.

The WSG scored 30 points with eight wins and eight defeats in six draws. “It was a happy end, but we deserved it. Not today, but over the 22 laps, we delivered a great performance,” said Silberberger. You want to prolong that “above”. “We want to play a sensible role there too,” announced the WSG trainer. Due to the division of points, only seven points are missing from second place.

There is Rapid after the second winless game against the Tyroleans. In contrast to the disappointing appearance at 0: 3 in Vienna, this time only the poor exploitation of chances prevented a triumph. “We lacked the determination in front of the goal a bit. You deprived yourself of the fruits of your work, we gave away two points, that annoys me immensely,” said Rapid coach Dietmar Kühbauer.

It fit into the picture that Ercan Kara failed with a weak penalty shot by Ferdinand Oswald and put the margin over it (94th). “But we should have been leading by three or four goals before the 911,” recalled Kühbauer. Kara herself mourned the two points awarded. However, the 25-year-old, who was called up for the first time in the ÖFB national team, also said: “So far we’ve got one or two more points.” The first Salzburg chaser scored 45 points in the regular round – five more than in 2019/20 when they were third at the time. Four points are missing after the points are divided on the front runner.