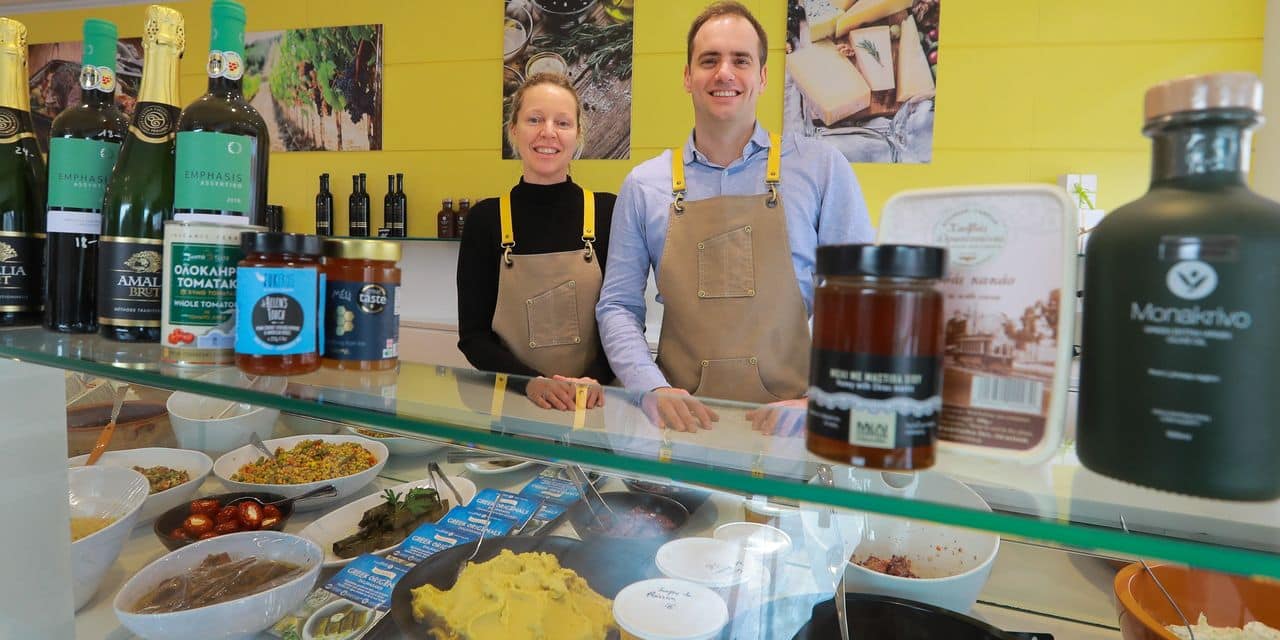 If Greek cuisine is filled with flavors, traditions, skills and delicious artisanal products, Greek catering has often blown hot and cold on this gastronomy. Hard meat Souvlaki, pink tarama, industrial tzatziki and plaster feta: it could be hard to swallow and it didn’t do it justice!

Fortunately, the 2000s saw the arrival of Greek chefs and restaurateurs wanting to restore it to its nobility and authenticity, far from the colonnades. And now, this cuisine, like the famous Cretan diet, is on the rise. Not to mention the retsina which has won back many palates!

In Brussels, we think in particular of Notos by Constantin Erinkoglou in Ixelles and Strofilia, a must-see restaurant in the old center, rue du Marché aux Porcs. And if you want to continue to eat the cuisine of this restaurant in take-away, you can now also go to the caterer “by Strofilia” recently opened Georgios Svanias, Stefanos’ son, who launched Strofilia with his brother.

A family affair, that’s for sure, since all the fresh dishes and mezzedes are cooked at Strofilia every day and then transported to the bright and spacious shop located a stone’s throw from Place Dumon in Stockel (Woluwe-Saint-Pierre ). Open since December 3, by Strofilia has already had the approval of the large Greek community installed in the east of the capital, very happy to now have everything “as there”, whether the restaurant or the Greece! Georgios and Nathalie, who hold the business together, barely come back: ” Saturday is madness “and on Sundays, they also open for a few hours around noon. Perfect for not … cooking and quiet Greek brunch. Simple and tasty pleasures were found there.

With as a guest star, the tarama, a gray beige color (without coloring) and airy (trade secret!) Which is truly incomparable. We add tzatzíki which smells like real Greek yogurt, herbs (and not too much garlic), octopus salad in vinegar, fava (a kind of hummus made from yellow peas) or even a magnificent “chtipiti” or a spicy Cretan feta salad. And we have enough to make an aperitif-small dinner that makes us see the sun! Gourmets will add “dolmades”, the famous stuffed vine leaves. SANs talk about wine, of course.

A moussaka that deposits

Also at the counter, hot dishes including of course the moussaka. And it’s quite another thing than what you buy in the frozen or fresh aisle of the supermarket: like another world of flavors and fondant opening up! There are also fillets of sea bass or stuffed squid, stewed veal, leg of lamb or even chicken ouzo-feta, the restaurant’s specialty, depending on the day. It’s simple, we want everything. And desserts too … the kadaïfs (vermicelli cake with sugar syrup)

The caterer also does fine food. ” I only work with Greek producers, directly for the products as for the wines and I taste everything before “, smiles Georgios Svanias.

There are also quality olive oils (the Monakrivo, in beautiful bottles), small canned fish, balsamic vinegar from northern Greece, and wonder, bottarga signed by Trikalinos, ” one of the best in the world “. In Greek, we call it the avgotaraho, they are cured mullet eggs. Thinly sliced ​​on a dish of pasta with lemon and olive oil, it is salty, special, tasty. .. divine !

Georgios also decided to promote Greek cheese, because there is not only feta in the life of the Hellenes! So he offers tastings on Saturdays which are very popular. We can eat them with light Greek croutons sold in sachets which are terribly greedy (we will come back for those with tomato). Feta lovers will also find a fresher, more supple specialty with a pronounced taste that comes from its maturation in oak barrels. Perfect for a tian with different aromas. On the hard side, you have to try the San Michali from Syros island in the Cyclades.

So there is something to feast on and be surprised, especially since the owner went through the oenology field and applied it to Greek wines and terroirs. And as it is his passion, he is not stingy in advice! When you know the progress made over the last thirty years in the vineyards of the country (and the islands), you can go there without difficulty. And rediscover retsina, the Greek wine that opens the door directly to magical vacation memories … But much better. Note, two kinds of Greek gins ” with powerful aromatic plants s and Mediterranean “are also to be discovered for around forty euros.

And all this under the gaze of Georgios’ grandmother, who passed away this fall, and who nurtured all this love for the kitchen of her sons and grandsons … The photo of the old lady with an octopus in her hand is full of joy, on this yellow spring wall.