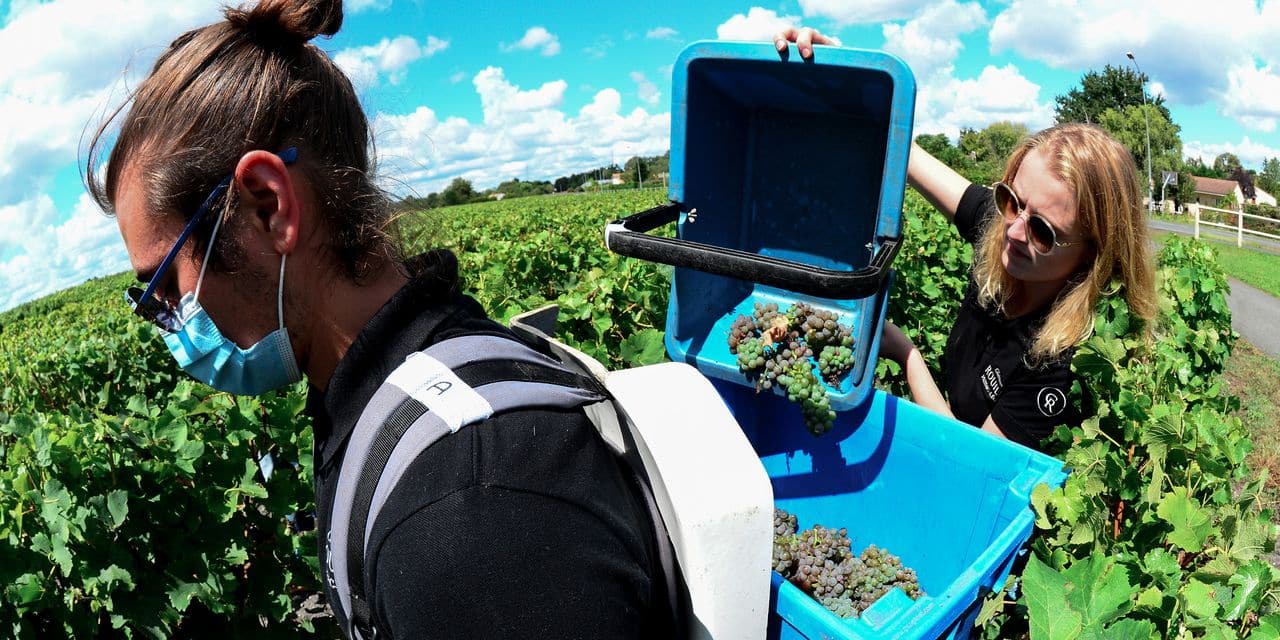 “We have the potential to make a good vintage”: in Bordeaux, the harvest is in full swing

About ten grape pickers are busy in the rows of vines that border the elegant estate located in the Pessac-Léognan appellation, near Bordeaux.

With the health crisis of the Covid-19, the cutting of the bunches of sauvignon gris is done with hydroalcoholic gel next to the coffee thermos, mask if the grape pickers cross between the rows of vines and disinfection of the equipment.

As elsewhere in Bordeaux, the harvest begins “with 10 to 15 days in advance” in 2019, notes Laurent Cisneros, the owner of the estate, owned in his time by Baron Haussmann.

“We had excellent weather conditions: it was hot, there was rain”, says this former professional footballer, who “a priori on a very good quality”, with “a very good acidity for the whites. But, as long as it is not in the tanks, we remain measured “, he adds with caution.

Same story at Château Carbonnieux, about ten kilometers away, which begins the harvest on Wednesday. “We have the potential to make a good vintage”, rejoices Philibert Perrin, co-owner of this château which produces classified grands crus. “We had sufficient sunshine to collect ripe grapes. It is up to the winegrowers to organize themselves to harvest at the time of the aromatic and taste peak.”

“In hot years, in Bordeaux, you shouldn’t hang around if you want to make these lively Sauvignons, aromat ical and refreshing ” sought after by the appellation, adds Perrin, also president of the Pessac-Léognan Wine Syndicate.

In the gravel, the harvest will begin Thursday at the Château de Chantegrive, with the Sauvignon Gris. “We had the optimal conditions during the flowering, with sun, wind, not a drop of rain” and these vines were relatively untouched by the mildew fungus, describes Chloé Le Bouffo, deputy general manager.

For the reds, which will be harvested in September, it is still too early to say, she continues.

Precocity and warmth do not always guarantee quality, warns Antoine Médeville, oenologist at Œnoconseil. “Often, Indian summers make great vintages in Bordeaux”, he admits, however, even if there were counter-examples as in 2007.

For 2020, “We would be closer to the characteristics of 2011, when it all started earlier: very mild winter, very fast flowering and this is an important sign of quality, it is a promising sign”, he adds.

“The earliness of the harvest is neither an asset nor a handicap”, abounds Axel Marchal, who teaches oenology at the Institute of Vine and Wine Sciences of the University of Bordeaux. “This precocity was present throughout the cycle, the vine flowered earlier than usual, the berries started to form earlier than usual… As for the quality, it is too early to tell.. “

Regarding volumes, the winegrowers do not necessarily expect an exceptional year.

For Laurent Cisneros, this vintage will have a special flavor. Beyond the unprecedented situation of confinement, the health and economic crisis, “it should be appreciated for its true emotional value”.

Previous Post
Holidays: what to do with vouchers that expire in March?
Next Post
Coronavirus: Belgium renounces the European final of the Bocuse d’Or