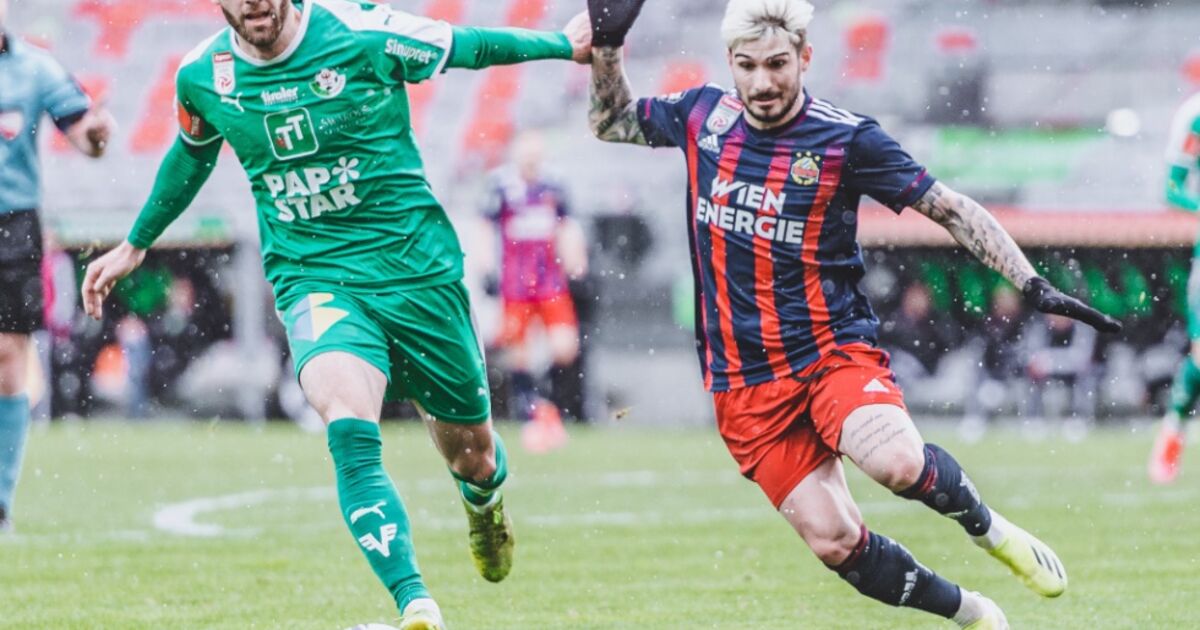 WSG Tirol made it into the championship group of the Bundesliga with a dramatic finish. Coach Thomas Silberberger’s squad handed in a 1-1 draw against Second Rapid in the home game of the 22nd round on Sunday, as Seventh TSV Hartberg conceded the 3-3 equalizer in stoppage time in the parallel game against SKN St. Pölten. Thus, at the end of the regular round, the Tyroleans remained one point ahead of the Styrians in sixth.

The Hütteldorfer now four games away without a win are seven points behind leader and defending champion Red Bull Salzburg. The fact that the gap before the points was divided was due to the fact that top striker Ercan Kara failed with a penalty kick to WSG goalkeeper Ferdinand Oswald in the 94th minute. Previously, “Joker” Tobias Anselm (84th) had equalized the Rapid lead from Kelvin Arase (74th).

The Tyroleans were still trembling after the final whistle, as they were still playing in Hartberg, and then celebrated extensively on the pitch. You had every reason to do so, as you already have the season goal of relegation in your pocket.

In view of the better starting position than Hartberg, the Tyroleans did without a total offensive in the “ultimate final”, but almost took the lead in the 17th minute with the first dangerous opportunity. A long-range shot by ex-Rapidler Thanos Petsos almost touched the pole (17th), Richard Strebinger would probably have been beaten. Defender Mateo Barac was just able to block a deal by Nikolai Baden Frederiksen (27th).

After that, however, the guests clearly took command and repeatedly posed problems for the guest defense. A Fountas conclusion was too weak, penalty complaints because of an alleged handball by Rafael Behounek went unheard by referee Dieter Muckenhammer (33rd). Two minutes later, Oswald fended off a Fountas shot, and Maximilian Ullmann put the margin from the fiver next to the case. Thorsten Schick withdrew in the 39th minute, this time defender David Gugganig saved just before the line.

This characteristic continued even after the restart, Rapid clearly controlled the action and pushed for the first goal. A Ljubicic shot was blocked by a corner (56th), and when Fountas and Marcel Ritzmaier had a double chance, Oswald reacted brilliantly twice (59th). In the 74th minute the spell was broken. After a Petsos mistake, Arase hit the corner from the penalty area after the latter had initiated the action himself.

At the time, the WSG was still ahead in the long-distance duel with Hartberg, which changed shortly afterwards with the TSV opening goal in Styria. Suddenly the Tyroleans had their backs against the wall, were forced to win and therefore took full risks. A short time later, Anselm was hit by a “joker”, completed according to Celic’s ideal game. In stoppage time, Bruno Soares Rapids Kara fell in the penalty area, but the attacker failed first to Oswald and put the margin well over the housing.

Due to the equalization in the parallel game, the Tyroleans cheered not only about the point win and the fact that they were unbeaten against Rapid as in Vienna (3-0).